Here are some truck photos from the Koo-Wee-Rup Swamp Historical Society collection. If you know what sort of trucks they are or about what year, then I would love to know. Click on photographs to enlarge them. 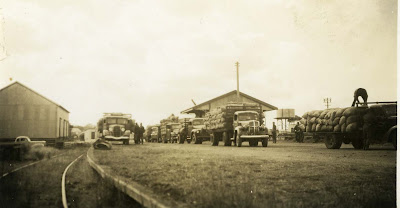 Loading potatoes at the Koo-Wee-Rup Railway Station. These (above and below) are the same scene, different view. They are back to the good old days of manual labour when men and boys could lift a bag of potatoes onto the back of a truck without a second thought. My father and uncle grew potatoes at Cora Lynn and allegedly my uncle could lift two bags of potatoes at a time - one in each hand. It may be a family story, but like many boys they were working, for money, on neighbouring farms from when they were about 13 and then milking the cows at home after that, so they were pretty strong.

The Koo-Wee-Rup Railway Station was opened in August 1889 and became a Railway Junction with the construction of the McDonalds Track Railway line that went from Koo-Wee-Rup to Strezlecki. This line opened in June 1922 and was completely closed by February 1959. 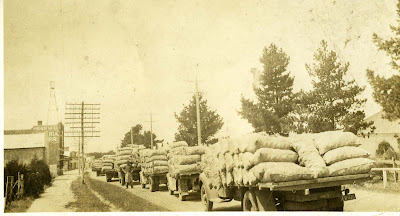 This is the line-up of trucks, in Station Street in Koo-Wee-Rup, waiting to go into the loading yard. The double story building on the left is the Royal Hotel, built in 1915. Potatoes have been grown on the Koo-Wee-Rup Swamp since 1893, when the land was settled after the drainage of the Swamp by the digging of the Main Drain. This 16 mile long canal went from the mouth of the Bunyip River to Western Port Bay. 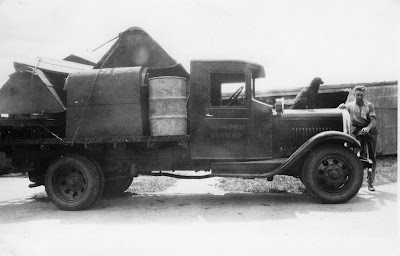 The name on the door is A.J Gilchrist, Koo-Wee-Rup. The caption on this photo is Eric Ferguson about to leave with Cameron Bros. equipment for a mining camp near Jamieson. Cameron Brothers had a sand pumping lease on the Main Drain, later taken over by Plowright Albion Limited.
Posted by Heather at 3:21 PM No comments: